This week I will have somehow accumulated 500 Twitter followers. To celebrate, I bring you my hack tutorial – Twitter for Newbies.

If I had a dollar for every person who asked me “What is Twitter?” in the short time I’ve been using it, I’d have at least enough for a tasty cocktail at a pricey club in West Hollywood, but maybe not enough for the exorbitant $20 valet parking fee. (True story. Happened last week.)

At least 2 readers of this site have wondered what the hell Twitter is, and I can imagine them scratching his and her heads when I post a link or mention it here. I did an exhaustive search threw out a request on Twitter itself for a post somewhere on the internet that gives a good explanation, and because my followers didn’t cough one up as the instant gratification to which I’ve become accustomed, I decided to write one myself.

I remember about a year ago when I brought my family to a blogger event at SeaWorld. As we all started to convene for the opening of Sesame Street Bay of Play, bloggers were standing around with their phones saying “So and So just tweeted that she’s on her way,” or “I just got a tweet from Blah Blah saying he’s stuck in traffic.” I wondered what the hell they were talking about. I figured it was some kind of instant message or something. You all know how I’m slow on the technology bandwagon, so it took me a while to poke around on the site. I can’t remember what made me take the plunge, but I joined Twitter last July. It was a slow build-up, but here I sit months later and find that I can live without it but I sure do like having it around.

I like to describe it as a real time message board. You type a message, click “update” and it shows up right there in front of your face. If you have chosen to follow other people’s updates, or “tweets,” those show up there, too. Here is an example: 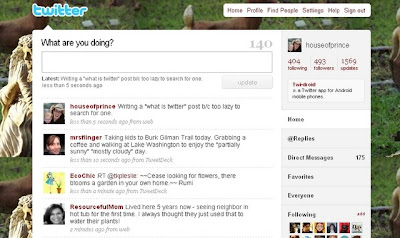 Well, everyone uses it for different reasons. Regular people use it to keep in touch with family and friends. Companies use it to market their stuff. Bloggers use it to pimp their latest posts. Anyone can use it just to kill time. I use it to feel connected in much the same way that blogging makes me feel connected. Twitter offers the kind of community that blogging and commenting have created, except it is faster. As with any of this online brouhaha, you get out of it what you put into it. If you never comment on a blog, nobody knows you’re there. If you join Twitter and follow a bunch of people but never update, they know you’re following but don’t know anything about you.

I started out following other bloggers I know, and then random unconnected people started following me, and then of course everyone follows Guy Kawasaki, and the next thing you know I have this odd little community of followers/followees made up of parenting bloggers, social media “experts,” PR reps, corporate marketers, musicians from around the world, and Trader Joe’s. Every day somebody new shows up or I watch a conversation between one of the people I follow and a random unseen person and I choose to follow them. (NB: not everyone you follow will follow you back, and vice versa.)

Once my Twitter ball got rolling, I found it helpful in several ways, including the ones I mentioned above. Sometimes it’s like standing in a crowded plaza and shouting, hoping someone hears. My favorite example is this: last winter I visited my friend’s office at the Department of Children and Family Services. Their childcare room broke my heart – it is where the “detained” children hang out and wait for someone to figure out what to do with them. It was clean and well-appointed, but their DVD player was broken. I asked Twitter if anyone had a spare laying around. One of the people I follow, but whom I hardly know at all, said “yeah, what’s the address?” And a week later, my friend got a brand new DVD player in the mail.

So here are some Twitter basics in no specific order for those of you who care to continue reading:

Screen name: or what I like to call my “Twitter handle.” Mine is @houseofprince, and my profile page is http://twitter.com/houseofprince.

140 Character Limit: This is why it’s called “micro-blogging,” and Twitter is serious about this. It will cut your shit off if you ramble on and on. If you want to include a website link in your upate but it’s too long, go to tinyurl.com and convert it into a shorter link.

Following: you must visit people’s profiles and click “Follow” and then they will be added to the “people you follow” list. Those people will be notified by email and they will be given the link to your profile so they can see who you are, read your past updates and go to whatever website you’ve added to your profile, and choose whether or not to follow you back. You can block your updates so that you may approve each follower, if you wish.

@replies: When you see an update that begins with another person’s handle, as in the example below, that means that the updater (or “tweeter”) is replying to a previous tweet by that person. You can see any replies sent to you by clicking on the @replies button on your right sidebar. That way you don’t have to miss any replies to you – but you may not see them until the next time you check. 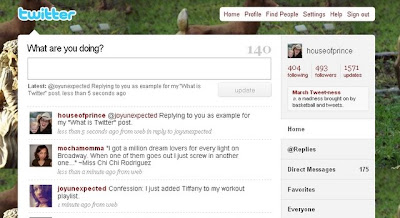 Direct message: To guarantee that someone sees your reply to him or her, you can send a direct message, or DM, to someone by visiting their profile and clicking “message.” They will get your 140-character message via email and nobody else will see it. Most helpful if you don’t have their email address already.

Extras: Once you get used to Twitter, you can fuss with your background as I did by using a photo that I love. You can use “apps” or applications that display Twitter in custom fashion or let you use it on your phone or from other websites, etc. You can set up your blog feed so that a tweet is posted every time you publish a new post on your blog. There are at least hundreds of cool things that people have invented to use with Twitter. I use exactly none of them. So far.

Time suck: people say that it seems like a lot of time is required to use Twitter. That’s one of the reasons I wrote this post. Like any technology, there is a certain time investment required to get up and running, but when you get the hang of it Twitter can actually save you time. Think of how long it would take me to call or even email 500 people to tell them I’m about to go out to lunch at a vegan Vietnamese restaurant. What did I ever do without it?

Re-tweet: When an update begins with “retweet” or “RT” that means that the tweeter has copied the text of another person’s update and posted it him or herself. This is useful to spread messages throughout the twitter-sphere, if you will, because as I said above, not everybody you follow follows you and vice versa. That means that if you RT someone’s update, it will reach a whole new audience, with some obvious overlap.

Breaking news: Often I will find out about something on Twitter before I hear about it IRL (in real life). When an earthquake hit in January, I posted something profane and then watched the tweets to see what the Richter scale measurement was. When the big fires broke out around here last fall, I tweeted about traffic conditions in my area and watched others’ updates about the progress in theirs. And politics? OMG. But be careful what you wish for – people tweeting about favorite television shows will spoil it for you if you are waiting to watch on your DVR.

Hashtag: When people put a label on their updates like #LAFIRE, you can use that in the Twitter search tool to see all updates with this tag. It’s a good way to find new people to follow if they are tweeting about the things that interest you. It’s also a good way to follow breaking news, or to check on the latest things that people think should #suckit.

Fake Tweeple: Tweeple is Twitter speak for “people.” FakeSarahPalin was there for a while and she was HILARIOUS. I personally follow @HolyGod and @SantaClaus25. Converse to the fake ones, many real celebrities are there too, like author Neil Gaiman and Brooke Burke.

Seriously? This list could go on and on. The real truth of the Twitter time suck is the amount of time I just spent writing this post. I hope it helps. See you there.