(If you follow me on twitter, you may already be sick of hearing about this. Allow me to invite you to sample some of my other wares: click on this for cute babies, or this for reviews, or this for pictures of me in a wetsuit.)

Today I bring you a little “behind the scenes at House of Prince” story.

Monday afternoon when I came back to my desk after lunch I refreshed my blog stats page and I thought something was wrong. It looked like a lot of people had visited my blog all at the same time. Normally I get about one every ten minutes because my average daily visit count has been less than 100, so this looked odd to me. I clicked on “view by referrals” which shows me where the visitors were coming from, and I saw many lines of this: “http://twitter.com/neilhimself” – and then it dawned on me.

Lots of people did come to my blog at the same time. As in, hundreds of them. 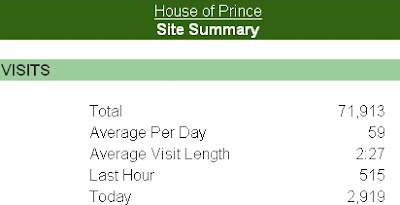 (Actual screenshot from my sitemeter page. Compare the
average per day to the “last hour” number. Cue hysteria.)

Here’s what happened: author Neil Gaiman (who wrote, among many other things, “Coraline” which became a recent movie, for which my previous company produced the behind the scenes footage and most of the bonus features on the upcoming DVD) got wind of my post, liked it, and tweeted the link. He has over 125,000 followers. Very many of them clicked on the link and/or re-tweeted as well.

For this marginally-popular-in-my-own-mind mommyblogger, such huge traffic is a very big deal, indeed. On top of that, the fact that an author, whose work I love and whose blog I absolutely dig, read my post and liked it is sort of mind-boggling to me. It hardly seemed real, until Mr. Gaiman actually followed me on Twitter and replied to my direct message of thanks:

If you know me in real life, you can imagine the “squee!” -ing and the hand flapping and the furious refreshing of my stats page. I also experienced a huge rush of new Twitter followers. I had been celebrating the accumulation of 500, but since that post hit the tweet-waves I now have 635.
As one of my coworkers said upon hearing this story, “That’s Twitter.”
I contemplated how to hold on to this 15 seconds of internet fame and turn it into something worthwhile. The best I could do was to pay it forward: I followed back many of my new followers, and in doing so I discovered and re-tweeted thoughtful blog posts, a scathing criticism of cute animals, and Trent Reznor on Twitter.
I wanted to thank all the people who re-tweeted my link but as the post took on a life of its own I started to lose track. If you’re reading now and you re-tweeted, thank you. And a big shout out to Tim whose “What is Twitter?” was the straw that broke the camel’s back and led to the post in the first place.
Mommy bloggers will tell you that they blog not for the attention, but for sanity. I started blogging to share my pregnancy stories with friends and family afar and indeed found that it helped me keep a tenuous grip on sanity in the early days of motherhood. My surge in traffic is dying down and that is expected and okay – when I go back to regularly scheduled programming of boogers and potty training accidents, those new readers may be sorely disappointed.
But…I really liked the attention. It was fun while it lasted. Next up, “What Is the Internet?”
This is an original post from www.kimtracyprince.com. Please don’t steal it.