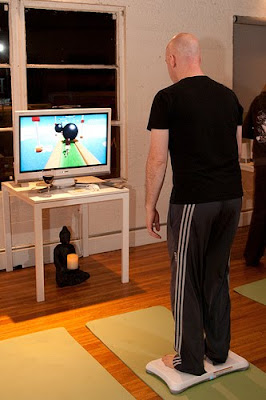 I haven’t really been into video games since back in the 80’s, when my parents, a.k.a. “Santa,” got an Atari 2600 for me and my brother for Christmas. Oh, the fun we had playing Pitfall and River Raid! My mom wanted to try it out, but we barely ever let her.

Fast forward to my adulthood, when I can do anything I want. Sure, I could have gotten back into video games, but who has time? (One might say, who has time to blog? Touché, I say to that one. Touché.) Even as video game technology has advanced to include incredibly realistic graphics and much more bloodshed and, to its credit, zombies, I have remained uninterested, untouched, nonplussed, etc.

That is, until I saw my family playing games on the Wii™ system by Nintendo.

Eight adults, three children. All were going nuts. The youngest child was given a remote that didn’t work, and he played along with gusto, not knowing that he wasn’t really playing. We all shrieked and hollered, and I was captured on film:

I hadn’t had that much fun with electronics since that time at the arcade in 1987 when I got to the sixth Q-Bert screen. Oh yeah, if you know what I’m talking about, then you’re as old as I am.

When I was invited to host a Wii Fit™ Plus party for Nintendo at the end of October, I accepted gladly. Not only would I get to play with the Wii again, but I would also get a preview of the new and improved Wii Fit Plus game that somehow allows one to work out using the system. At home. For an easy few minutes a day, if that’s all one can spare. Even as a family activity. On top of all that, I got to invite a bunch of my friends to play, too.

We were told to dress for yoga, and that we would indeed be put through a workout. As a fan of yoga myself (despite the shortcomings of the gym classes I attend) I was intrigued.

Once we assembled, we sat through a demo of the Wii Fit Plus game. You can enter all of your personal stats, including height and weight, and the system will track the numbers for you on a daily basis if you wish. It measures your weight when you stand on the Wii Balance Board™ that is remotely hooked up to the Wii system. It even measures your center of gravity, which it uses as the goal for many of the exercises. Personal trainer Natalie demonstrated many of the functions of Wii Fit Plus and did a little workout while we watched. 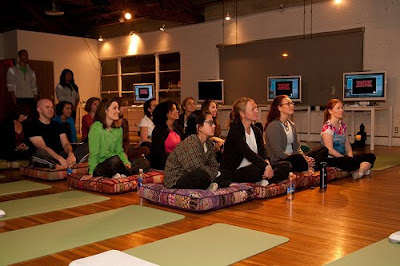 Then it was time for us to try. We paired up to go through the pre-designed yoga workout by taking turns. I have to say I was skeptical. How would an electronic system be able to tell if I was doing the poses correctly? It’s all about the center of gravity as measured by the pad. Even in warrior 2, you keep one foot on the pad, which is a bit awkward at first, but I soon forgot about that because I was so focused on keeping the red dot in the yellow zone. It was NOT easy. 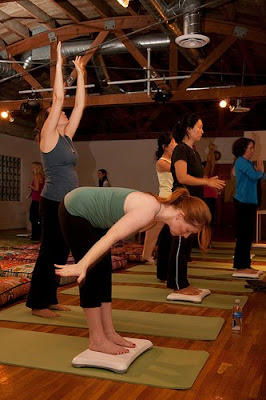 Once finished with the workout, the system told us how long we’d been working and how many calories we’d burned off. There is even a function that quantifies the calories in food.

So then they gave us food. But it was healthy, and also delicious. 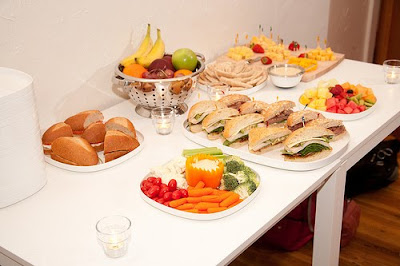 After a little break for eating and drinking and mingling, we headed back to the stations to play the games included in the Wii Fit Plus. Because working out doesn’t have to be all work.

There is a chicken-wing-flapping game: 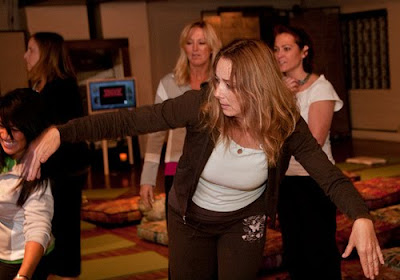 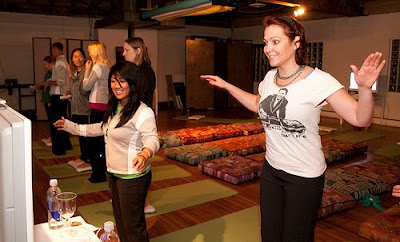 There is also an obstacle course that everyone compared to the TV show “Wipeout.” I failed miserably, running off the track into the water at the first jump. I enjoyed watching my friends having fun trying to master the games:

And I’m not sure what this one was but let’s call it the Game that Made Yvonne Jump For Joy: 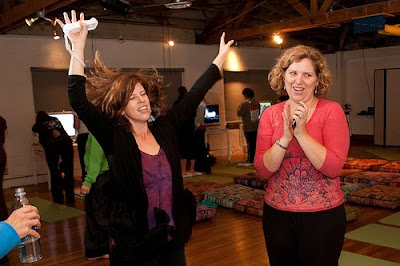 I also remember a balance/brain exercise game that is a combination of Simon and whack-a-mole using only your hips. I was good at that one.

Then the best part and the disclosure blah blah: after providing me with an invitation platform, a party for 17 of my friends, food, and fun, all of which was free, Nintendo gave everyone there a Wii Fit Plus. Half the crowd were bloggers and half weren’t, and you could tell at that moment. Let’s be honest – as bloggers we are not strangers to getting awesome gifts when we attend an event. I’m not saying the bloggers weren’t delighted to receive it. But the non-bloggers were as happy as my brother and I on that Christmas morning over 2 decades ago when we saw our bitchin’ Atari 2600.

And then, because I didn’t already have a Wii myself, they gave me one of those, too. 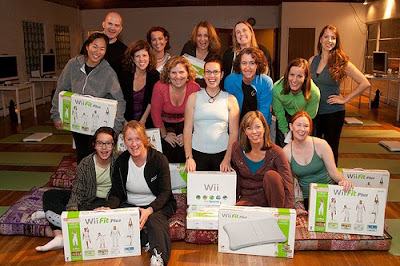 Everybody say “Wii!”
As awesome as all of that was, the item that I now use almost every day that I got at the event was the yoga jacket that the staff handed to guests on our way out. I put the jacket on and my friend Lisa said “Wow, that jacket makes you look really skinny!” 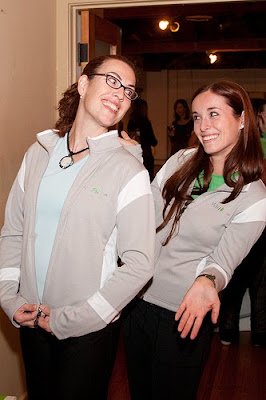 Here are some thoughts from some of the other guests at the party:

“It’s a really fun set of games that make you enjoy getting a workout, especially the obstacle course and the hip shake/count-to-ten one. Love those! Then the way you can actually customize a workout, designed specifically for your time and needs, that’s very cool. I think it’s a very cool device.” —Sarah

“Josie and I had a great time, from the delicious smoothies that started the night to the awesome games and fun that ended it. My favorite moment in particular was watching the expression on one the Nintendo guy’s face as I utterly bombed the Snowball Fight game. ‘I’m pathetic,’ I told him. He kindly demurred and explained that I needed to move from my upper body only. ‘You’re throwing your entire weight into it,’ he said. So what else is new?” —Vicki

“Of the new games, I’d say my favorite is Obstacle Course, or whatever Nintendo calls it. It’s basically like the reality TV show where people make idiots of themselves going through an obstacle course. You get to do that without actually getting wet or injured or humiliated beyond the spectators in your TV room. Two thumbs up. ” —Michael

“It was so fun and silly and it got me laughing and forgetting about all the stresses in my single parent life. For just a little while. And, most importantly it got me hopeful that I can figure out a way to get exercise back in my life without it adding more stress by trying to make it work or costing a fortune in babysitting fees and gym memberships. It will be a while to save up for the Wii itself though.” –Sandri

“I had a great time at the Wii Fit party because I was able to do Wii yoga without a 4-year-old trying to knock me over while I did the tree pose. It was such a peaceful setting to get to know other mom bloggers and find out more about Wii. It seems that most of the problems I had with my Wii Fit have been fixed and I have renewed motivation to do yoga/workout at home now that I have a new Wii Fit Plus (thanks Nintendo!).” —Yvonne

“It is nice to exercise and hear laughing instead of moaning!!” –Kate

And now for the more awesomely awesome part. If you’ve actually gotten this far, you are lucky ducks. Nintendo has given me an additional Wii and Wii Fit Plus and I am going to give them away to a lucky commenter right here on this blog! Here are the rules: 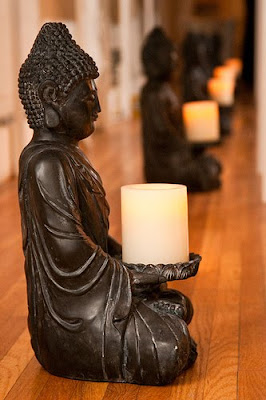