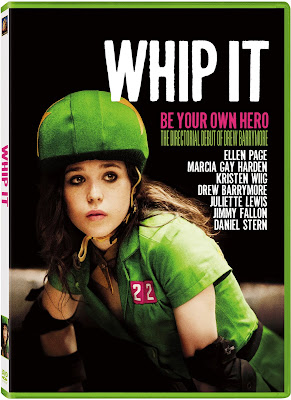 Sometimes, when you’re mired in the humdrum day-blending life of a suburban working mother, it helps to watch a bunch of bad-ass chicks beating the crap out of each other while traveling at high speeds around a rink wearing miniskirts. While the story of Drew Barrymore’s directorial debut, “Whip It,” turns out to be predictable, fitting right into the typical sports team-comes-from-behind-because-of-plucky-unlikely-hero format, not to mention the teen rebellion/coming of age format, the action and characters were satisfying to not just me but also my hard-to-impress husband and even my 2-year-old who couldn’t sleep last night. “It’s da race!” he exclaimed during the final sequence.

Ellen Page is just as adorable as she was in “Juno,” although with considerably less script to chew on, and the supporting characters are all nice to look at and listen to. For me the standout was Barrymore herself, whose every appearance was the indulgent equivalent of punk rock mosh pit melee. It was fun to see her go balls out for once, gleefully partaking in a food fight, hurling her body at other skaters, tackling her character’s fiance, and on and on.

This film appealed to my husband on the sports level, and I was just curious. I would definitely recommend this as a rental, and if you’re into that sort of thing, purchase it for the bonus features, because any chance to get inside Drew Barrymore’s head is pretty priceless. Also, Juliette Lewis, an actress I’ve always loved (“How sexy am I NOW?!”) plays a 36-year-old menace. The scene in which she gives Page’s character the older woman smackdown is just…awesome.

My review copy was provided by Fox, who has given me three copies for my readers. Leave a comment here and pass it on – comments will be open until Friday, February 12, 2010 at 8:00PM Pacific Time and winners will be chosen from them by Randomizer.