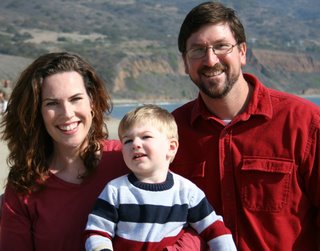 Before 2006 is over, let me tell you about our Christmas.

With my mother and father and Stewart’s mother all visiting, we had a full house. We also had someone to play with Kyle all day long, no matter what. It was amazing to watch him blossom and to witness him finally showing off the ability to speak English. He can count to ten (then twelve and twenty!) and say all the letters and identify most planets in the solar system. His obsession with the moon was fed several times a day as he hoodwinked one of the unsuspecting adults in the house into sitting at the computer and playing with moon searches on Google.

With all of Kyle’s new awareness, I was looking forward to a big present-opening spree on Christmas morning. It was not to be. The mountain of wrapped gifts did not impress him at all. Of course, it was before 7 in the morning. Rather, he wanted to go outside “‘side?” and play, or if we opened a gift for him, he wanted us to put it together and play with it right that second. It took until 11 am to open them all.

During one of our breaks, I made our family’s traditional Apple Puffed Pancake and a package of bacon, and we all sat down to eat breakfast. It was just as I had imagined it. Exactly what I wanted for Christmas. Well, without the other 19 members of our family there.

Later in the day the adults left me and my mother home alone to cook dinner, at my suggestion. We made a ham and several sides, but easy ones. Dinner was served around 6pm, and by 7:30 I was exhausted. I could not move a muscle. I didn’t care who cleaned the kitchen or even if they did at all. We did not have dessert. Everyone was too full.

From reading other blogs I have learned the valuable lesson about toddlers and Christmas gifts: too many is too much! Kyle did not care about any one of them at first – now he enjoys pushing his new shopping cart around and activating the trumpets on his Little People Castle (not like they used to make it, but still cute). Those two things alone would have been fine. I appreciated all of the clothes his relatives sent and I will be posting pictures of him in them, stay tuned. But really, this year there were way too many gifts. And next year I think there will still be too many but maybe I will ration them out over the course of the day. I know Kyle will be much more aware of the holiday and I don’t want him to be overwhelmed.

I finally went through all of the boxes, bows, and gift bags to decide what to keep and what to throw away. We have WAY too much garbage, which is bad because Monday is our garbage day, and with Tuesday being a federal holiday I fear the trash trucks won’t come until Wednesday. We’ll be swimming in garbage for days! Wanna come over?