It took almost 8 months, but I finally got a formal portrait taken of Kyle. I’ve been holding on to this coupon booklet since before he was born, and I decided to use it because I’ve been trying to get a decent photo of Kyle with mama and daddy to use for our Christmas card. There are several conditions:

-I must not look too fat.
-Stewart must not be sneering.
-All three of us must be looking at the camera.
-The photo should be composed well, not off-balance with too much room on the top, bottom, or sides.
-We must be sitting together, not watching Kyle try to crawl away or something.
-The photo must not be totally washed out, which usually happens with our extremely bright flash.
-The background must not suck.

One or more of the above rules were violated during all attempts to get a good shot with our digital camera and a rudimetary tutorial with some unsuspecting family member or friend. So I sucked it up and made a sitting appointment, warned Stewart, and purchased a Cute Outfit for Kyle. (I know, they’re ALL cute, but this was a special mission.)

Oh, boy was I in for a terribly rude awakening. I should have known, considering we were at the MALL, in DECEMBER, on a SATURDAY. Also, I can look back and say to myself “you call yourself a PRODUCER?!” Because to get to the sitting appointment on time, I had to wake Kyle up from his nap and rush him to the mall without feeding him. Thus, we were trying to get toothy smiles from a tired, hungry baby. Nice.

MY shortcomings aside, what I found at the mall shop was this: an assembly-line photo joint with 4 “rooms” or studios in which you are allowed 15 minutes, five poses, and…get this…NINE, yes the number 9, NINE FRAMES OF FILM. And not only was it film, it was FILM film, not digital. To top that, our “photographer” (imagine me making the quotes in the air with my fingers, because that’s the effect I’m going for) was a college student who was only there because it’s her weekend job and all she really wanted to be doing was smoking a joint and eating a hot dog. Okay?

I know I sound like a photo snob, but I’m not, really. But look who you’re talking to. I should have known this about myself. The last time I was “formally” photographed was at my wedding, by a highly-paid and extremely wonderful and talented woman named Leslie. She was so patient with me and made me feel like a supermodel. I guess that’s what I was looking for when I actually hired someone to take Kyle’s picture. I wanted him to be treated the same way. Instead I had to constantly instruct our weekend shooter on how to get Kyle to smile, and she did her best to ignore me even though I apologetically admitted that yes, I’m one of those mothers. As a result, we never got the toothy grin I was looking for.

I returned to the mall several hours later, expecting the worst. But in the end the shots weren’t that bad, because, after all, remember who we’re talking about. 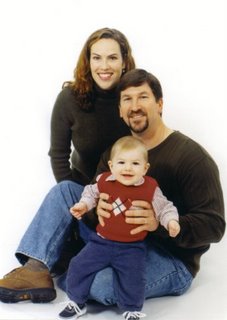 Family and friends whose address I still have: this is NOT the Christmas card photo choice, after all. For the first time, Stewart has expressed an actual OPINION, so the committee went with something much more…California. Stay tuned to your mailbox (snail, that is) for the final product.

We also had Kyle’s photo taken alone, and it turned out as a variation on the pose above. And I chose not to display it here, but I had a naked shot of him taken, and it’s so cute I could kiss his little bottom right there on the matte photo paper. However, his facial expression is one of pained acquiescence, as if he would like to say “FINE! But hurry the f&*k up.” I guess I was pushing it though, because Weekend Photographer had to ask her manager if a naked shot was okay, and the answer was “yes, but only up to one years old.” That’s not a typo.