This is part four of my London adventure. When we last left our intrepid heroine, she was coming off a professional high and had just been asked to join a lone male diner at a tiny restaurant off Marleybone High St. on a Tuesday evening.

My gut reaction was to make a face and think “no way, you weirdo.” But this was Bizarro Kim, not normal Kim, and I instantly changed my mind and said “yes, thank you, I will join you.” My new date whisked his laptop off of the table and introduced himself without getting up. He was about 30, thin and blond, with glasses. His name was Phillip from Poland.

He explained that in many countries of Europe and especially Germany, where he often travels for business, a lone diner is thrust into a crowd of diners who simply share a long table essentially on top of one another and avoiding conversation with them is impossible. He compared that kind of experience with diners in England and America, who look down with blinders on, not daring to make eye contact or small talk with fellow patrons.

I’d say he has that right. It doesn’t matter if you are dining, standing in line at the post office, or just walking down the street. Since the election last week, as Jon Stewart told us on the Daily Show, people in New York have been making eye contact with each other and…it’s weird. I won’t get back there until January, when I’m sure the excitement will have worn off, so perhaps I’ll miss it. Can’t wait to try it out, though!

Back to Phillip from Poland. Since I am not terribly well-traveled I did not pick up on any particular accent, so of course he was Polish. And his accent was rather thick to me, but then again, I found the English, if they spoke too quickly, hard to understand. But by listening closely, reading his lips, and occasionally resorting to pantomiming, we managed a pleasant conversation in which I told him about my great interview with Big Movie Star (just come find me on Twitter and I will tell you who it is), careful to avoid glancing at my purse in which the videotape snuggled in case he was a spy from a rival film studio sent to steal it from me. He told me about his business as a Scientist who travels the world setting up wind farms to create renewable energy.

That launched that whole conversation about noble enterprises and changing the world and existential dread and traveling vs. having children or traveling and having children and well…I guess you had to be there but I know I have this problem about being so self-deprecating about my profession (not the Mommy part, there’s a whole blogosphere and book industry about being a self-deprecating Mommy and we’ll talk about that later) and maybe that dinner is where I was inspired to write about that again.

Anyway, since I was still coming off my high from the interview and the relief of not having to drag the two metal easels that were supposed to hold up the artwork around anymore, I got all excited and ordered dessert, which was extremely and wonderfully delicious. First I offered to share it with Phillip from Poland, but he said “No, get your own dessert!” without hesitation. Apparently his good will extended only to sharing the table and conversation. Fair enough.

Except it turns out that he was not Phillip, nor was he from Poland. See above for the difficult accent thing, plus it was loud in the restaurant, and I was all hopped up on adrenaline and sugar. In an embarrassing moment of realization, it became clear that his name was Willem and he was, in fact, from Holland.

So that’s why his accent seemed familiar to me! One of my very dear friends is also from Holland and as soon as I realized my mistake I almost shouted “Belachelijk!”-  which means “ridiculous” – because that is the only Dutch word I know. Oh, I also know “flesselikker” which sounds kind of dirty, but it means “thing that scrapes the last bit of ketchup from the bottle” and I know that because this friend brought one all the way from Holland for me after I coveted hers.

So, with dinner done the weird awkward “what do we do now?” moment came and then Willem from Holland stood up. He was approximately 9 and a half feet tall. Irrationally, this scared the crap out of me so I shook his hand and said goodnight. Later I realized that was incredibly rude of me and it was like staring at someone’s birthmark after they told you not to look, but hey, it was a weird night. I wanted to email him but of course I lost his email address already and so I looked his company up on the internet. If you are interested in building a windmill farm and you need somebody to single-handedly set that up for you and cut through all the governmental red tape, he’s your man.

It was only about 9:30 PM when I got back to the hotel, so I was able to get to sleep early after some serious blog-catching up that I sorely needed to do. Thank heavens for down time! My first order of business in the morning was to head back to Napket, where the clerk very kindly set aside my sunglasses after I left them there the day before. I had a coffee-shop breakfast of chocolate croissant, fruit cup, and coffee, then I set out for The National Gallery.

I’ve come to the realization about myself in this fourth decade of my life that I don’t like art. Well, it’s not that I don’t like it, exactly. I mean, I’m moved by a poignant photo or a bright painting as much as the next guy. It’s just that, like wine-tasting or indie rock, I don’t know the language. And I have no patience with it. A cold glass of Two Buck Chuck, a book of Calvin & Hobbes cartoons, and some Creedence on the radio, and I’m good. Easy to please. A cheap date. There it is. But my DAD likes art and I hadn’t gotten him a souvenir so I decided that a tube ride down to Trafalgar Square would be a good use of my last few hours in the city. 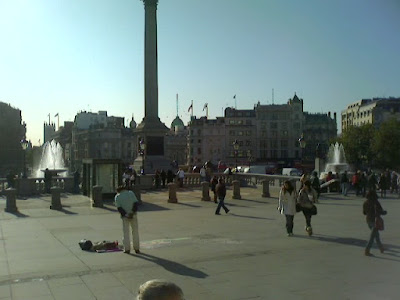 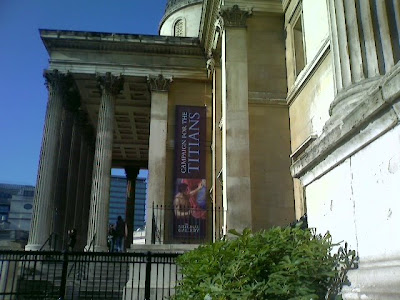 The National Gallery is a donation-only super-famous art museum, so I was prepared to be impressed, despite my unenthusiastic attitude about art. I had read a book about Caravaggio so I skipped off to see his work first, only to find two tiny paintings in the corner of a giant room that were actually painted by him. Oh sure, I got to see some Rembrants, Van Gogh’s, a da Vinci drawing, etc. but meh, I’ve seen those in reproductions my whole public-school-class-dragged-to-the-museum life.

What I was very impressed by, however, was the age of all of these things. I mean, if those really are the actual paintings there on the wall, my face was inches away from something that a person handled up to five centuries ago. That blows my mind. Also impressive was the maze-like layout of the gallery, in which I got lost and out of which I only found my way by asking directions (not before hitting the very cool gift shop).

I took my time making my way back to the hotel, savoring my last sunny morning in this good city. As I walked through the last tube station, a musician played guitar and sang “Leaving on a Jet Plane.” I am NOT KIDDING. Again, I wondered if there were spies following me, reading my mind. I started to cry a little bit. It was worse than a Hallmark commercial – it was my life!

One last international meal of apricot-filled crepe with a cappuccino and I was on my way. 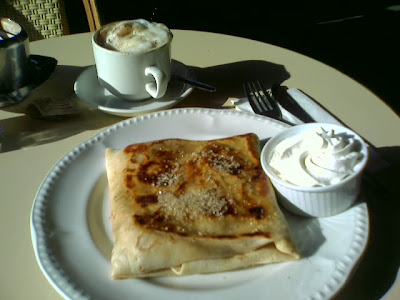 On the plane I treated myself to hours of TV and bad movies (“The Hulk,” “The Happening,” “Four Weddings and a Funeral”) but less liquor this time, because I was going home to see my kids. Ages later, I finally stepped in the front door and was tackled by Brady and Kyle who wanted to see what I had bought for them right away. Stewart had kept them awake for my arrival which happened around 9PM, so we put them to bed and I fell asleep almost instantly. The cleaning lady had come that day, so the house was clean, but I still spent the entire next day putting things away because it looked like a giant baby had picked up the house and used it as a rattle, and all of its contents settled in the wrong places. It was a good exercise though, because it helped me ease back into real life.

Oh London, how I loved you. 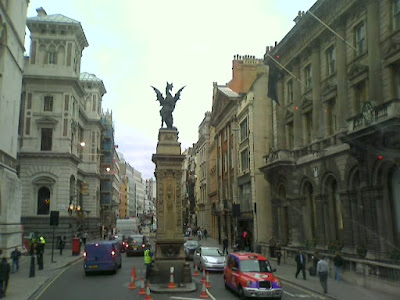 Part 1:   London After Dark
Part 2:  The Long Post About London Rain
Part 2.5:  The Big London Tease
Part 3:  The London Aha! Moment
If you have read through all of this, you deserve a reward like a free toaster or something, grateful as I am that you followed my story and appreciated my words. But I can’t send you a toaster, so I’ll at least tell you that it was Nicolas Cage whom I interviewed, and he was in London filming “Kick Ass” which is why I got to go in the first place. Here is a link to some of the soundbites from that interview. Just imagine me on the other side of the camera, nodding and smiling and hoping he couldn’t tell just how dramatic I was feeling.