I met the lovely Sarah of Mini et Moi for breakfast at a pastry shop up the street. The morning was chilly but sunny. I loved walking up the busy street to meet her. I stood in the vestibule waiting for a few minutes wondering what she looked like – a typical blogger blind date – but of course when she walked through the door we knew each other immediately and hit it off right away. She helped me decide what to order, although I chose the very British-looking soft-boiled egg in a little cup all by myself. Imagine it: two bloggers, one American, one South African, having breakfast in London. It’s all so international!

Sarah walked over to 50 Wimpole Street (former home of Elizabeth Barrett Browning)  with me after breakfast and took the picture of me in front of the building, and then I walked with her to Bond St. station so she could catch the tube and I could head down Oxford Street to begin my morning of shopping. I hit a few department stores and London’s version of F.A.O. Schwarz, Hamley’s. 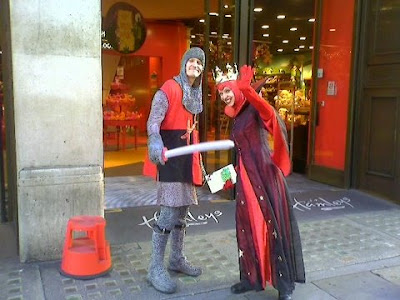 This multi-level toy store is organized by age and gender, and almost every toy has a sample out for testing. It was there that I first felt that temperature-grade change so prevalent in winters in New England: cold outside, roasting inside. Lots of removal and re-donning of layers of coat, scarf, and sweater.

I visited Liberty of London at Sarah’s suggestion, because I wanted to get some special souvenir fabric for my mother. Wherever she travels, she finds a quilt shop or at least a fabric store and collects fabric the way my father collects books and my husband collects loose change and pint glasses. The store is humongous and maze-like, but oh so posh (expensive) and filled with the most amazing collection of…everything. They had clothing, fabric, Christmas ornaments, knick-knacks, fine gloves, jewelry, three cafes, and a delightful little corner filled with varnished shells. I had to ask directions to get back to the street. My mother was delighted with the fabric I chose (with the help of the fabric specialist) and plans to make a vest with it. 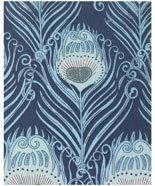 After Liberty I made my way back to the hotel, but I took an indirect route because I so loved wandering the streets and seeing where they took me. I walked down Brooks street where I stopped in for a coffee to “take away” at Napket, a fancy looking coffee shop that dubs itself purveyors of “snob food.” I went there twice during my trip and so far as I could see it was a halfway house for business men to have meetings out of the office. They didn’t seem very snobbish to me. Plus, the coffee was good.

I wandered through a foot-traffic-only square lined with high-end little boutiques that took me right back to Oxford Street and Bond Street. I just love that every other block in London seems to have set aside green space for a park. I also love the iron gates that surround them and the climbing foliage that has survived into the autumn chill. People actually walk about and sip coffee and read the newspaper there.

Once I got back to the hotel I killed some time doing research and re-preparing for my big interview. By the time I had had lunch and gotten myself ready to go, I had worked myself up into such a state of anxious worry about this interview that I was feeling sick. The butterflies in my tummy would not quiet down no matter how much I reminded myself that this is what I did for a living not so long ago and would they please shut up and go away. It’s been years since I did a shoot like this, and since then the technology has advanced and I have not kept abreast of it in a manner that satisfies my own standards of perfection, which as I am learning are impossibly high.

I left the hotel during the sunny afternoon and rode in the back seat of a Mercedes through stop-and-go traffic with my stomach butterflies. Plus, before I left my room I slathered a bit of body lotion on my neck to serve as perfume in case I started sweating uncontrollably out of nervousness. The problem was that the lotion was too heavily scented and also I fear it was men’s lotion. The combination of the backseat ride, the stuffy car, the nervous butterflies, and the bad nightclub cologne scent of my own neck made me one unhappy passenger. I feared I might barf right there on the creamy carpeted floor of the exquisite German vehicle. Luckily, my extensive experience with drinking too much and trying not to barf came in very handily and I managed to keep my composure. When we got to the studio I hurried away from the car, gulping the fresh air, and waited in the lot’s cafeteria for the call to the set.

So here’s the big Hollywood part.

It was a typical soundstage like you’ve seen in any comedy about the behind-the-scenes workings of movies or television. Our little crew was set up in one corner, behind lots of things and down the hall from other things and to get there from the stage door you had to walk by all of these things in the dark, trying not to trip over cables or debris or your own two feet. It’s an art, really. Also, you must be cheerful and professional and you must NOT barf on the crew or the publicist (who were all very nice and lovely and made me feel very comfortable. Also they helped me box up and prepare for Fedex an ungainly collection of movie art and metal easels).

The crew was there for two interviews and mine was second. My first job, once Big Movie Star came in the door and sat down, was to turn off the house lights and flip ON the red light outside the stage door that warns people to not come in because we’re shooting. Then I snuck over to our little set, folded myself into a little ball behind a trunk, and watched.

When it was my turn, I settled myself into the chair opposite Mr. Star…and I had a moment.

As I sat down, taking care not to get any of my body parts in front of the camera lens, making sure my eyeline was correct with Mr. Star’s, I realized that all the poise, attentiveness, and sharpness that it takes to execute an interview like this had come flooding back to me like I had never stopped doing this work. It was like muscle memory, only it extended to my brain and spirit. The butterflies went away, and I felt great. The feeling was energizing and made so giddy that I had to suppress a delighted cackle. I consciously kept my voice measured and serious enough to match Star’s own demeanor while still keeping the mood high so that his responses would seem as interesting as they were.

Because they actually were. I got 12 minutes with him. I traveled from California to London to interview someone who lives in California…for 12 minutes. But those 12 minutes were actually all pretty worthy, and in the end, I daresay they’ll all be useful for the project. As soon as I sensed that movie-star-impatience kicking in, I wrapped up the interview. I thanked him, he signed the release form, and off he went. Literally – he left the soundstage, hopped in a getaway car, and was whisked off the lot. Presumably back to…California.

Doing this interview made me remember how much I used to love doing this work, and that despite the emptiness of Hollywood and the very little stock I put in paparazzi and gossip and “the media,” I did enjoy the work itself. While many of my college classmates went on to be doctors, lawyers, rocket scientists, business owners, policy makers, etc., I did this. And I often felt that it was a lame profession to have chosen, however “cool” and “hip” it made other people think I was. It wasn’t at all noble, or helpful, or important to the world. That is the existential dread that made me always say that I was working toward a career in documentaries – important documentaries, you know, the kind that mean something. On the morning of September 11, 2001, I actually went to the office because I had just started my new job at Big Cable Entertainment Network and my task that day was to research the life of Kirk Cameron.

See what I mean?

But. I’m good at it, I like it, and I’ve still got my Producer Mojo. Whew.

With the mission accomplished and the pressure off, I was ready to party. Trouble was, with the pressure off, I was exhausted. The lovely crew dropped me at Elstree & Borehamwood station so I could catch an above-ground train back to the city (which was awesome because those suckers are fast). By the time I transferred to the tube, went the wrong way, got off and back on the right way, and set out to walk back to the hotel, all I wanted was a meal and sleep. It was a great post-accomplishment buzz. All natural, no partying needed.

I got off at Baker St. and went south through the neighborhood toward the hotel, and decided to stop off at Zoom for dinner because that was the one restaurant my boss recommended whose name I could remember at the time. It’s a sleek, tiny place with lots of little round tables and friendly international servers and great wine list. I parked my stuff and used the restroom, and when I came back upstairs, the man at the next table said to me, over his open laptop, “I noticed you are dining alone. Care to join me? No strings attached.”

Did she:
A) Throw a drink in his face and shout “You cad!”
B) Run back downstairs to the loo and hide?
C) Accept the gentleman’s offer, figuring it would be a great story for the blog, at the very least?

Tune in next time to find out!

Part 4:  The Last Word on London